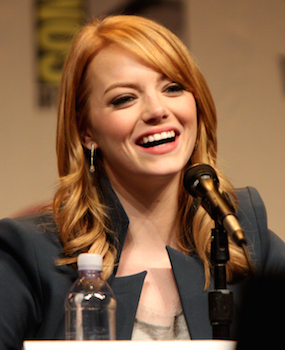 Recently Emma Stone (Aloha, Birdman, The Amazing Spider-Man) admitted that she didn’t think she would choose to go back to Twitter and set up a new account but did mention that she had a Pinterest Account.

“I would be humiliated if anyone were to see how many inspirational quotes I have. I got a lot of like, ‘Just pick yourself up by the bootstraps.'”

Last year on the Tonight Show Starring Jimmy Fallon she admitted to having a Pinterest account but kept it secret.

We’re not surprised that Emma is choosing not to go back to Twitter. Unfortunately a lot of celebrities receive a lot of negative tweets which can be psychologically damaging. However with Pinterest the users are way less likely to interact with a negative approach. Pinterest isn’t the same as Facebook or Twitter in the sense of being nosey on what celebs are doing in their daily lives, it’s about feeling inspired and positive.

Now Pinterest have moved to Verified Accounts, they’re encouraging celebrities and public figures to make the jump and grow their following on there. Again, I believe this is a great move, I’m not a massive fan of using Facebook and Twitter on a Personal Level because of the amount of personal information it’s capable of giving away, if I were a celeb, I’d pick Pinterest over them!

Which Celebs or Public figures do you follow on Pinterest? Who WOULD you follow if they were on there? Let us know in the comments below.