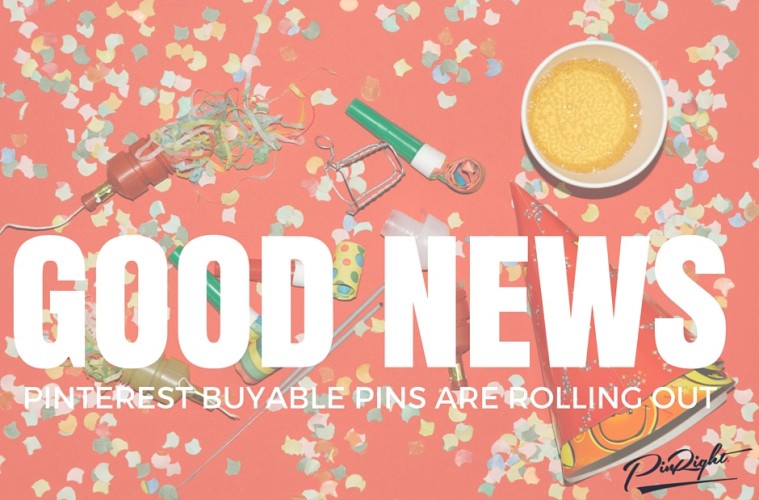 We knew about them and we were excited about them, but Buyable Pins on Pinterest seemed to be only for the big brands. Pinterest launched their amazing new Buyable Pin service with the use of two e-commerce platforms only – Shopify and Demandware.

Well good news because Pinterest announced today that they are expanding that to include 3 more e-commerce platforms:

At the moment 60 million pins are currently Buyable Pins which sounds huge but if you think of it as a percentage of the total amount of pins available on Pinterest  (50 billion) it’s actually only 0.12% so it leaves PLENTY of room for growth.

Pinterest are adding more Brands and Shopify stores on a daily basis so it’s going to be an interesting time watching the Pineconomy evolve.

Pinterest have reported that Shopify merchants that have tried the programme have seen double the conversion rates than normal mobile pins.

Buyable Pins make the purchase process on Pinterest seamless. You see something you like and you can buy it there and then using instant checkout mechanisms like Apple Pay. It means you dont have to fill out lenghty forms and you don;t even have to leave Pinterest. No other platform has got anywhere near that kind of customer experience nailed down so Pinterest have the potential to as they say in there words get people to buy ‘on Pinterest’ not just because of Pinterest.

One of the most exciting things about buyable pins is that the merchant gets to keep 100% of the sale – Pinterest make their revenue through ads tools so that is a huge incentive for businesses to use buyable pins.

Expect to see more and more buyable pins popping up on your smartfeed as this new Pineconomy takes hold.