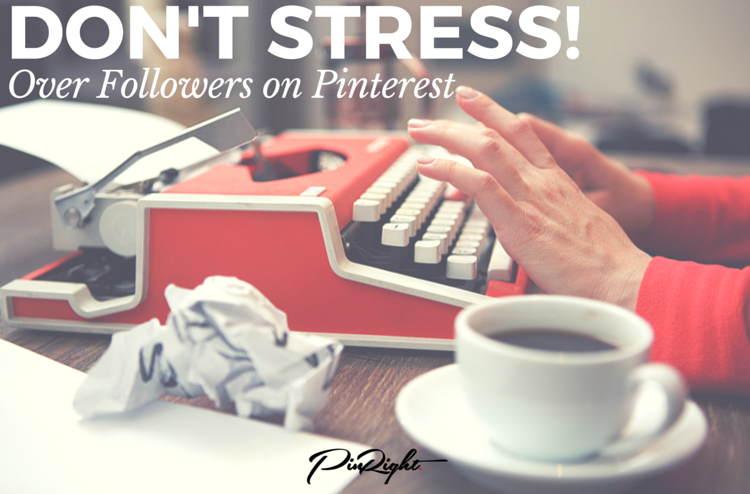 DON’T STRESS OVER THE NUMBERS – FOLLOWERS ON PINTEREST AREN’T EVERYTHING. PROVIDING VALUE WILL LEAD TO QUALITY TRAFFIC

FOMO (Fear of Missing Out) is a terrible thing, so is CIA (Comparison Induced Anxiety – I made that one up). They make you worry are you doing it right, is someone doing it better, are you missing out on what they’re doing, do you need to change? It all churns up into making you feel unsettled and like you’re doing it all wrong… ORRRRR You can make it a brilliant driver, a motivator for change, an inspiration to investigate.

I Could Have Panicked…

I read a comment from someone in a Facebook group that said some of our pins didn’t have many repins and “for such a big account why was that?”. I could’ve panicked. I could’ve thought oh my goodness she thinks our account is crap, she has criticised us publicly. What am I doing wrong? I need to change my strategy? All my pins must have lots of repins? Maybe other popular Accounts have loads of pins and I don’t – am I missing out?

But it didn’t make me think like that, it actually made me really interested to think about what it is that people think is “social proof” on your Pinterest account. For some people it’s how many followers you’ve got, for others it’s the amount of re-pins that you get, for some it’s even the amount of actual pins or boards on your account.

But really the ultimate test of success is the amount of traffic your account drives to your website and resulting sales from that traffic. You could have an account with 800 followers that could be driving 20,000 visitors to your site per month. Equally you could have an account with 200,000 followers and be driving traffic nowhere. Both of these types of account exist on Pinterest if you look closely.

Just one of your own original pins could be repinned and seen by thousands and it could drive regular targeted traffic to your site. That could be from an account with only 300 followers. In that respect the amount of followers is irrelevant, it’s who repins your content that counts. Also your own original pin might only have been repinned 3 times but onwards it could’ve been pinned and seen by thousands.

So judging accounts or pins by isolated numbers of followers or repins is out of context of the bigger picture. To understand more about the reach of pins check out our article.

I wanted to really prove my theory and like I make a regular habit of auditing our own account I decided to use the same methods to look at high profile power pinners on Pinterest. What I found surprised me and totally backs up the above. I looked through 10 very popular power Pinner accounts and I noticed the following commonalities:

On one account, pins that had been repinned over 100,000 times before being on that board were still only repinned at that point an average of 30 times.

The original amount of pins that you get doesn’t indicate it’s total life, if it’s a low number don’t panic remember it’s evergreen.

Rich pins are a MUST. Not all pins need high repins just a steady stream across your account to drive steady traffic.

Pinterest is a far more even playing field than any other platform. You CAN drive large amounts of traffic for FREE. Elsewhere you would have to pay for ads, here you can still move that traffic with quality content and consistency.

Bearing that in mind, consider what explosive results you can get with promoted pins by multiplying your exposure and targeting your keywords. Promoted pins haven’t rolled out outside the US yet but we’ve used them and they are crazy gooooood!